Previously, the toughest challenge in moving to 12G had been getting gear that equipment to speak to one another, according to Music Matters national account manager Ken Sorrell: “Getting pieces of gear to talk, trying to find the right 12G cable and the right connectors that will allow us to get the maximum distance from our video switcher to, say, a projector. That’s a challenge,”

FOR-A has the ‘know-how’ with working 12G 4K workflows

Of the selection, Sorrell said: “FOR-A has really simplified the transition from HD to 4K thanks to their 12G single-cable solution and vast knowledge of broadcast. They have the ‘know-how’ from real-world implementation of actual working 12G 4K workflows. Plus, the operation and workflow of FOR-A’s equipment is so intuitive.”

Color matching to large LED walls and projection displays is a significant challenge with live event production, particularly when LED walls and projection displays are used in close proximity of each other. According to Sorrell, the adjustment knobs on the front panel of the FA-9600 are “crucial” for engineers to quickly “paint” outputs and match different display technologies as closely as possible, as opposed to a mouse and GUI. “Being able to easily adjust what I’m showing to match what I’m getting is huge,” he added.

FOR-A video switchers are “never going to fail you.”

The MFR-1000 offers a clean switch between sources. As a result, Music Matters can use the router as a cuts-only video switcher when unscheduled needs arise. Sorrell was already familiar with FOR-A switchers because he’s relied on HVS-390HS, HVS-110, and HVS-100 switchers for more than 600 shows without one failure. “I’ve put FOR-A on every big festival, tour, or other event that I’ve had for the last eight years,” he said. “FOR-A really thinks everything through – not just the function of the switcher, but also the ergonomics of the control surface and workflow of the GUI. It’s such an easy switcher to use. It’s rock solid, it’s durable, and it’s never going to fail you.” 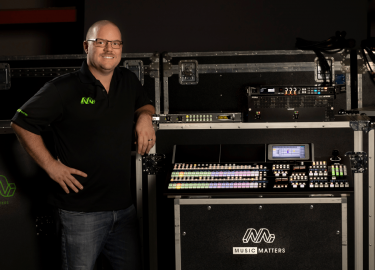