Seattle Channel is a municipal television station available on local cable systems and the web (seattlechannel.org). Current COVID-19 restrictions require City Council meetings and other civic and arts programming be produced using videoconferencing software. However, when restrictions are lifted, station personnel are looking forward to getting back to producing multi-camera shoots in the community.

According to Daryl Peck, video engineer for Seattle Channel, a traditional production vehicle can be problematic in the city, because it can be difficult to find parking and run cables, particularly if the shoot is on a higher floor of a building. That’s why the station prefers its production flypack, a portable solution that can be easily transported to the site.

Peck complimented the switcher’s reliability, as well as its traditional control panel.

The Seattle Channel flypack has been anchored with a FOR-A HVS-110 switcher since 2013. Peck complimented the switcher’s reliability, as well as its traditional control panel. “FOR-A’s made it really easy to use our existing cameras with traditional BNC connectivity,” he added. “With built-in frame sync, we don’t have to genlock the cameras, which makes wiring much easier in the field.”

Plus, Peck said the built-in features help their workflow in the field. For example, Seattle Channel is often asked to include footage of a sign language interpreter when covering special events. Peck uses the integrated DVE to place a video window of the interpreter on the screen – and because he can position the video window, it doesn’t interfere with any on-screen graphics. Also, the switcher includes an integrated, customizable multi view with HDMI output, which saves the need for additional equipment on location and simplifies monitor connectivity.

Does your flypack need a switcher upgrade in preparation for your post-COVID workload? Schedule your FOR-A switcher demo here. 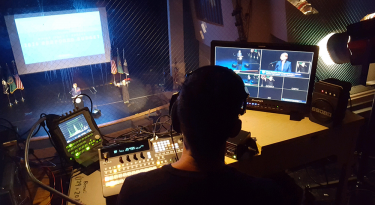