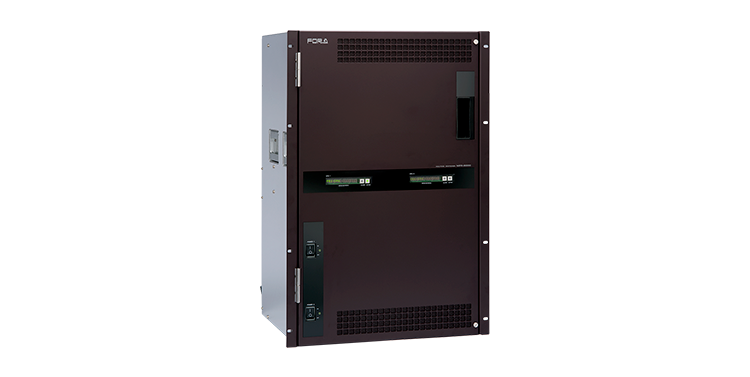 The MFR-8000 builds on the functions and control interfaces of MFR-5000 specifications to offer an expanded matrix of up to 256 inputs/256 outputs in a 16U frame. Expand your 4K/8K routing freedom with 12G-SDI I/O and gearbox support offering the most inputs and outputs.

Add the MFR-16SDIGB and MFR-16SDOGB cards for conversion of video (quad link 3G-SDI/12G-SDI) and mapping (2SI/SQD) formats. These options open the door for equipment previously incompatible with 12G-SDI, enabling system building focused on this new specication.

Ready for a range of audio input/output cards. This allows for a combined audio/video router in a single unit along with A/D and D/A conversion, plus embedding and de-embedding.

Each input/output board has 16 channels and up to 16 boards can be installed together. As a result, matrices of up to 256 inputs/ 256 outputs can be configured, allowing the unit to support 16 inputs/16 outputs of 8K signal and 64 inputs/64 outputs of 4K signal.

A variety of crosspoint control features are available in addition to normal crosspoint switching.

One routing switcher can be virtually partitioned to build any theoretical hierarchy, creating possibilities for use in various operations.

Remote SNMP monitoring allows the router to be easily integrated into an SNMP monitoring system. In this way you can monitor status of various items including power source, fan and CPU units, presence/absence of signals, crosspoint errors and more.

Designed for maintainability, all boards and power units can be accessed from the front without removing cables.